It's been a long time since I had a new book out. This is the longest I've gone without a NEW title, but you guys went all in on the Good Enough re-release--and I love Noah & Payton so much--I wanted to let it have its moment in the sun. Especially because it FELT new enough with its additions and its original release was so limited that it practically WAS a new book. Then Gangster Country was re-released so work on my current WIPs took a backseat. But. I'll digress and say how SUPER stoked I am to finally give you guys Simple Things.

Since both re-releases were pretty heavy angst and I'd been back in those worlds I wanted to write a book where things were a bit more laid back. Even the guys realize the angsting they're doing is a little ridiculous--but they're both in this place in life where things had been complicated and crazy and they didn't know where to go next. So they both end up "home" again to figure it out. Then, needs must, and they end up having what they think is some no-strings good times together, which inevitably leads to complications for two guys looking to "simplify". They were frustrating to write, but a nice change of pace since there wasnt any HUGE drama between them other than both being a little lost in their first world problems.

I hope y'all like it. For those looking for an angsty bang, this one isn't that kinda Kade Boehme book. I think my friend and I called it a "low-angst, sexy, coffee-on-sunday kind of read."

SO. I'm giving you cover, blurb, and more a teaser than an excerpt here, though I guess it's a long enough snippet to be more "excerpt." Also, I'm putting up pre-order links! (I haven't done pre-orders in a while but thought why not?) So without further ado: here's your peek at Simple Things, releasing in eBook and paperback March 25, 2016. 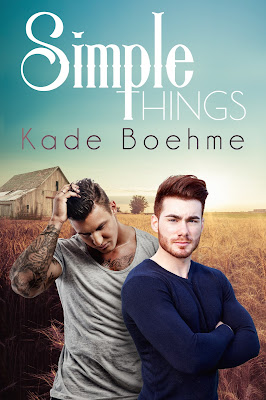 Carter Darling’s life has been a whirlwind since his mother was elected to senate when he was a teen. From private school to joining the military, he tried to make his own path while making as few ripples as possible. But an injury forced him to figure out new goals for his life. After his parents are involved a sex scandal, he decides to go back home to Tennessee to get some distance and out of the madness.

He didn’t figure on Jeremy Beck returning at the same time.

Jeremy’s finally past the rich boy angst that made for some dramatic teenage years, but he hasn’t earned back much respect from his parents playing in an indie band. Now, his band’s on hiatus and Jeremy’s looking for space from his unhealthy non-relationship with a band-mate so returning home to figure out his next step seemed like the way to go.

Their initial reunion is awkward, Carter still hurt by their last meeting and Jeremy trying to convince himself Carter’s still just his sister’s closeted little friend. But when they open up to one another again and decide a staycation fling will be a nice distraction, they may get more than they bargain for.

For two guys who’ve had so much drama in their lives, it’s surprising to find that sometimes love is found in the simple things, simple times. But even simple things can get complicated when two men don't know what's next in life and too stubborn to face what it's offering them on a platter.

TEASER
(the following is unedited)

Jeremy felt a fondness he’d only ever reserved for Carter, one he hadn’t even been able to deny when they were younger. “No. You’re one of the good things.” He came around the side of the ATV and put a hand on Carter’s face. Carter seemed surprised, but he didn’t move, leaned in fractionally. The soft look in his eyes broke the last of Jeremy’s resolve and he did something he hadn’t done in a very long time…
He placed a closed mouth, simple kiss on Carter’s mouth. It was a hello and an I’ve missed you and it held no promise but it was more than just friends. Carter pressed into the kiss after a moment of stunned stillness. Neither of them opened their mouths, it stayed a gentle meeting of lips.
Jeremy shuddered. He’d never ever been kissed like this. As much as Jeremy wasn’t promising with the kiss, Carter wasn’t asking. It was a kiss. And it was gentle and it made Jeremy glad he’d gotten the fuck over himself for ten damn minutes and remembered his rules.
When he pulled back, Carter had a shy, crooked smile. “Hi.”
“Hey.” Jeremy took a step back, taking his hand from Carter’s face.
“So,” Carter said. “What’s this? You need space? You wanna just hang out?” That was the more grown Carter. Young Carter was inquisitive and talkative but rarely forward. He had the look of a man who wanted to know where he stood and Jeremy could respect that.
“Thing is, I like simple. My motto over the last several years has been ‘keep it simple and always be straight forward’. No confusion, no hurt feelings. I forgot that for a minute and got wrapped up in a not-so-healthy thing. I don’t wanna be a not-so-healthy thing for you. I can’t promise anything, I don’t expect you to either. But I liked being with you.” Jeremy sighed and admitted out loud, “It made me feel good to be with you. I forgot it could feel good to be with someone.”
Carter looked so sad for Jeremy and Jeremy almost wished he’d kept his mouth shut. “I liked it too. Honestly. You, uh, made me feel good too. I definitely wouldn’t mind more of that. If that’s what you want.”
“You sure?”
Carter looked back out toward the pasture. “I know you’ve got a life in Austin. I have one—kinda—in New York. I’m not even sure I’m looking for something serious.” Carter looked at Jeremy and his adam’s apple bobbed, obviously nervous about what he was saying next. “Cards on the table—I’ve been so alone for so long and I think you have too. And I trust you. I do. I hope you can trust me. And maybe, while we’re here, we don’t have to be so alone. Because around you, I don’t feel alone, never had.”
Jeremy wanted to balk. That sounded heavy. The sounded intense. But he yearned. He knew exactly what Carter meant. “A torrid winter affair we’ll remember when we’re old?” Jeremy teased. Yeah, he remembered Carter’s love of big romantic films. Being gay himself he hadn’t wanted to stereotype Carter for them when Carter was a teen… But...
“Shut up,” Carter said, flushing. There was that boy, the romantic, sweet Carter who’d followed Jeremy around like he had a huge crush—the one Jeremy had let follow him because he thought it was the only way he’d ever feel that warmth from that man ever.
Part of him thought maybe they were about to get in over their heads, but why not? If they only ever got this one brief respite, this short amount of time together before they went on with their lives, why shouldn’t they take it?

Let me be real because THERE GOES my chill. Fuck off with your ‪#‎AllLivesMatter‬. If you're saying that, you don't UNDERSTAND ‪#‎BlackLivesMatter‬. You obviously have never suffered at the hand of systemic racism or apathy. You haven't lost a family member or friend to a system tilted against them from economics to education to the legal system intended to protect them.

"Some of my best friends are cops." I'm only being a little facetious. I do have good friends who are cops. Even they accept the ugly ass truth that being a police officer doesn't flip some switch in your head that turns off the racism you held before you put on the badge. A good cop leaves that shit at home. But there are exceptions. I think even #BlackLivesMatter folks will tell you these racist officers are the exception rather than the rule. BUT. We see it, we have the facts, the numbers that show, unfortunately, some cities' WHOLE FORCES are the exception. What's wrong with having a real conversation about it?

If you are or you know a woman whose allegation of sexual assault was met with "well, you're a whore"; if you're a gay man who's been beaten for that reason alone and met with "well, you were in this neighborhood with that lisp", a hispanic woman who got IDed and asked if you were an illegal FOR NO REASON, then you should understand better than anyone.

Y'all are right. Police officers have an IMPOSSIBLE job. I respect the hell out of all First Responders. It's hard. They put on a uniform every day that makes them a target in some neighborhoods and go out on the streets to uphold our laws. But as they are the epitome of our defense against crime, they also MUST be held to the HIGHEST standards and made accountable—and yes, moreso accountable than anyone because they ARE the law.

But America isn't turning a blind eye when a white kid gets shot by the cops, unless he's low income. Then, again, you should understand how the system is tilted against you and your family and demand accountability since we are ALL equal under the law. #BlackLivesMatter is a movement in which African Americans INSIST on their civil liberties, their rights, and their value as CITIZENS of our country be taken seriously, and that they don't have to fear for their children, ESPECIALLY AGAINST THOSE CHARGED WITH THEIR CHILDREN'S SAFETY. But it's also a movement for all of us, and a chance for us all to get it right and I'm SO fucking sad and disappointed in how many people's knee-jerk reaction is to lose their chill because they think they or a police officer they know/love are being called a racist. It's so much more than that.

Check yourself, because we already wrecked it.