It baffles me that I can't even say "race & religion are the final frontier" of bullshit in romance. It isn't a frontier at all. We beat each other TO DEATH over sexism, transmisogyny, gender roles, yet we NEVER talk openly and honestly about racism and cultural / religious appropriation -- only in small corners of Twitter. Racial issues hit the fan SO infrequently, and when they do there be no "think pieces" nor are there a hundred people "weighing in" as seems to be the norm with EVERY OTHER FUCKING ISSUE in the genre. 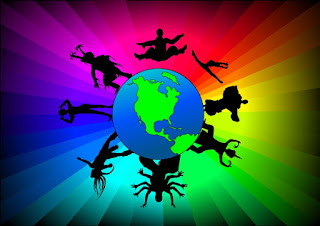 I'm obviously great and totally happy with us being tolerant and trying to be the most informed people we can be. We should. We should strive to teach and to learn. I mean, with the frequency we discuss it all -- and fight each other over genre gender issues and sexuality labels/non-labels -- I literally feel, sometimes, like I discuss & think about all this stuff more than I ever did taking actual Gender Studies and upper level Sociology in university. Again, it's great we're all so aware, but ... while everyone is worried about who has the right to write what and are HYPERsensitive to the role of this person or that person or what "Queer Romance" means to each person -- and sometimes they're nasty, knock-down, drag-out fights -- we so often and constantly just walk right by casual and not-so-casual racism and religious insensitivity. No one is discussing it. A handful of people get upset over one of these issues, occasionally, and the genre as a whole ignores it.


A Hispanic character is more than a general character with a few italicized Spanish words with a mother who’s illegal; an African American character is far more than ebonics and a “chocolate dick that contrasts so beautifully with the bottom’s ivory ass cheeks.”


And religious characters… Not just a hijab, an up-tight cross bearing martyr, nor just kosher boys who’ll throw over their respective ideals for a relationship.


Race and religion are SO significant, there’s such a sense of identity found within being a Brooklyn Jewish person or a WASP from New England or an African American Pentecostal from Georgia or an agnostic Native American from Noxubee County, MS. Culture is SO important. Hell, gay culture is a huge part of M/M, so I dont have to explain at all why culture is a huge part of characterization and even plot.

Many authors rely heavily on a sense of place or setting for the cities in which they base their stories. And they’re done with such seamless and flawless understanding of the areas that you can smell the air, see the buildings. You can sense the camaraderie in a small gay bar in a small town with a group of LGBT men and women in these books so much that you feel like these people are your friends.


So. Why in the actual fuck can the same sense of respect for and sensitivity to culture and language and family ties and sense of community not be given to these characters? WHY is your character using racially insensitive language unless it’s a necessary part of narration? Why is your character casually anti-semitic unless you have a big picture plot going on? For your main character to accept his/her romantic interest calling him/her an insensitive term or to just convert to make the significant other more comfortable, you’re saying “it’s okay for people to give away huge chunks of their identity so long as they keep their man happy”. That makes me wanna just scream FUCK THE PATRIARCHY. What the fuck kind of message is that in a genre that’s BUILT around diversity? How rich does it make your character to let a part of their personal identity be something so easily sold out for an obviously unhealthy relationship?


I GET IT. Some brown and black skinned people don’t want to be known for their skin color, some gay men don’t like labels, and some Jewish people convert, BUT in the infinite and often unchecked privilege in the romance writing community, it’s standard and accepted that everyone gives up anything “for love” and since 8 out of 10 books have a strapping white “alpha male” MC, of course one gives up anything to be with HIM.


IF you can’t see that it’s not okay to treat religions and race as just minor character traits like eye color, if you can’t put in some actual research or ASK A QUESTION, why even bother? It surely can’t be helping your sales to write a Person of Color who abandons all sense and reason and sense of self for their one WHITE true love. That's undertones and overtones and 50 shades of insensitivity.


We have SUCH diverse readership. Authors have done it with gay/bi characters since M/M started... If you feel you aren't portraying a PoC right, e-mail one of your friends/readers. Same with religion. If you don’t know more about a religion or its practitioners or an ethnic group than what you’ve seen on an episode of Law & Order, you should definitely ask more questions. You don't have to let them beta your work and you don't even have to let other people dictate HOW you write... but it srsly takes 5 seconds to ask a quick question.


I'd, personally, rather say "I'm trying not to, but I’m probably going to sound like an ignorant fuckhead here, probably, so PLEASE help me: [insert question]" and have a FRIEND who understands I'm not TRYING to be an ignorant fuck head, that I’m honestly trying to educate myself, correct me than drop a book full of ignorant fuckheadedness and offend THOUSANDS of people.


Because, while romance and fiction aren’t always political, you do step into a more political arena when you’re writing about minorities. And if you can’t take the time to be sensitive, to ask a question, it’s hard to come to your defense when there’s backlash. Because in 2016, with our level of understanding of SO MANY issues in our little corner of the internet, our understanding of pansexuality and demisexuality and homoromantic asexuality and non-binary zes & zers, -- hell, we are even lauded for being more sensitive about body image issues, at times -- we should be SO much more capable of being racially, culturally, and religiously sensitive.


And that this isn’t a conversation anywhere but in a quiet corner of the twittesphere is really disappointing.


But, hey, PLEASE continue to write more diverse characters. Don't let anyone tell you not to or that you aren't allowed to. We need more diversity, as our rainbow is full of not only many different types of sexuality, but people of different races, backgrounds, religions. And I think our readers -- certainly my friends I’ve met through this genre -- love the individuality of our characters. But remember to come at it with respect. I know I’ll line up to read what you do.