Excerpt: Confessions of a Wild Heart

I'm SOOO excited. (And nervous b/c Ase and Jase gave me such fits) It's almost time for Ase & Jase to come out. So I'm posting the first official excerpt to kick off the promo. Soon, we'll start Snippet Sundays, as well, to tease a bit. I loved writing these guys' story. It's also my longest solo book to date at 80k words (about 280 pages). I'll have buy links as they come. Don't forget to add it to GoodReads [Click Here]. I'm still blown away by the cover art by the awesome Natasha Snow. For those I teased on FB, that's my picspiration model for Ase, too, so I couldn't be more thrilled.

I have to say, the cheering on and encouragement from everyone as I wrote this one, which is a bit heavier than my last couple of books, was amazing. I have THE BEST readers/friends/MMfamily EVER. From my Tweeps to my people on Facebook, to people commenting here on Kaderade: In Your Face. Y'all really made this fun and I'm glad y'all enjoyed angsting with me while I worked on this book.

So a little on this book, so the excerpt and snippets make sense. Confessions of a Wild Heart is told in 3 parts: Wild Heart, Broken Heart, and Freed Heart. The first part is told 4 years previous to the rest of the story in Broken and Freed so it's a bit more like a 6 chapter prologue. Then parts II & III go throughout the 10 months after they meet again and do a helluva dance getting out of their heads and learning to dance together, rather than alone.

So the excerpt you get here is from the 1st Chapter, which also happens to be in Part I so it's set in Germany, where a young PFC in the US Army named Jase Emery is on his first vacation during one of his leaves. (He'd been going home for them all, even when it was a pain, because...family.) There, he catches the eyes (and camera shutter) of another young American student. They spend a brief weekend together and are torn apart by circumstance before being reunited in Jase's home town in Texas 4 years later. But anywho... So here's the excerpt. 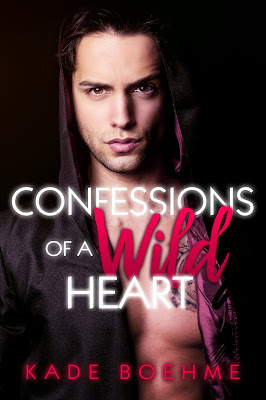 US Army PFC Jase Emery, on leave in Germany, sees Ase Ramirez for the first time with a camera to his face. Ase’s silly attitude, tattoos, & sexy motorcycle provide a welcome distraction for Jase. But their weekend of fun ends abruptly when Ase’s Catholic, Mexican-American family catch them. Through email, Ase and Jase are able to keep the link open. But that too comes to an end.

Jase was never able to live up to his parent’s expectations like his younger brother was. He didn’t stay and work the family ranch, or marry. He saw the world. His return from serving in the Army changed nothing, he wanted to be free to live his own life. But the death of his father and his mother’s failing health force him to come home, hide his bisexuality, and live a life in the closet as a local Sheriff Deputy so he can take care of his family. This was to be his life… Until Ase returns.

After his family caught Ase and Jase together, Ase worked hard at getting the heat off himself. His occasional thoughts of Jase and their amazing weekend dwindle as life and family take the forefront and fear drives Ase to make huge mistakes.

When Ase and Jase come face to face again, it isn’t easy. Insecurities, and a hurt that have only grown with time make it hard to see the future.Can their friendship blossom into something more? With Ase’s wild side reappearing from the shadows and major trust issues, can he and Jase, with huge obstacles of his own, learn to forgive, move on, and find a peace they both so desperately want… together?

Includes a Stetson wearing deputy living in a glass closet and a toppy bad boy with a lot of drama—and a love of women's clothing—who together just may learn to stop dancing alone.