Alright! Got the first actual excerpt from Simple Things for you guys today AND a big giveaway, with ARCs and signed paperbacks and swag bags! I'm so stoked! It's my first new title of 2016 and my first new title since last fall. It feels like it's been forever, even with the SUPER DUPER successful re-release of Good Enough (can't thank y'all enough for that!).

Conference SN: for those who will be at Rainbow Book Fair here in NYC in April, I'll be selling copies there. If you'd like one for RT in Vegas, get in touch with me before March 25th.

Gonna start with the gorgeous paperback cover reveal and blurb, then I'll go right into the excerpt, followed by the giveaway! 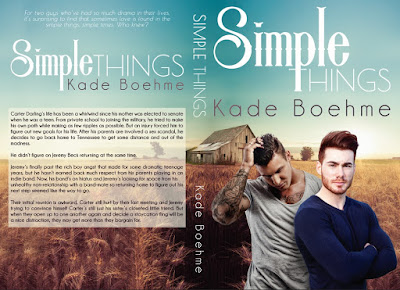 Carter Darling’s life has been a whirlwind since his mother was elected to the senate when he was a teen. From private school to joining the military, he tried to forge his own path while making as few ripples as possible. But an injury forced him to figure out new goals for his life. After his parents were involved a sex scandal, he decided to go back home to Tennessee to get some distance and get away from the madness.

He didn’t bargain on Jeremy Beck returning at the same time.

Jeremy was finally past the rich boy angst that made for some dramatic teenage years, but he hadn’t earned back much respect from his parents by playing in an indie band. Now that his band was on hiatus, Jeremy was looking for space from his unhealthy non-relationship with a band-mate, so returning home to figure out his next step seemed like the way to go.

Their initial reunion turned awkward. Carter was still holding on to hurts from their last meeting and Jeremy was trying to convince himself that Carter was still just his sister’s closeted little friend. But when they open up to one another again and decide a staycation fling would be a nice distraction, they may get more than they bargained for.

For two guys who’ve had so much drama in their lives, it might surprise them to find that sometimes love is found in the simple things. Who knew?

Enter the Rafflecopter for your chance to win!
Contest ends March 13th!
ARCs will be sent out the same day as blogger/reviewers ARCs, March 14th.
All winners will be notified that day. Check your inbox and spam folders!
Open to international readers, will ship paperbacks anywhere.
Paperbacks will go out closer to release day, you'll receive a tracking number.