I decided I wanted to let my hair down a bit and write something kinda smexy, a little dirtier than my usual. It took on a life of its own and has become a little more romancey than I thought Trevor and D ever would. But... how could they not when Trevor really wants the D and D wants him right back. 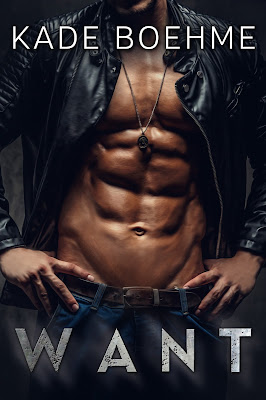 WANT
by Kade Boehme
Cover by Dar Albert
Coming May 2016

Trevor McEntire and Dante "D" Vargas have been dancing around each
other for years. D knows he shouldn't keep crossing the line with his best
friend's little brother. Trevor knows he shouldn't keep setting himself up
to be hurt by D's hot-and-cold routine. That'd be easier if every meeting,
every taste didn't leave them still wanting more.